With the preliminary agenda just published (or soon will be), I wanted to report what Birds-of-Feather (BoF) sessions there will be at IETF-95. This time there is quite a lot of work following up on a recent IAB workshop on the effect of encryption on network operators. 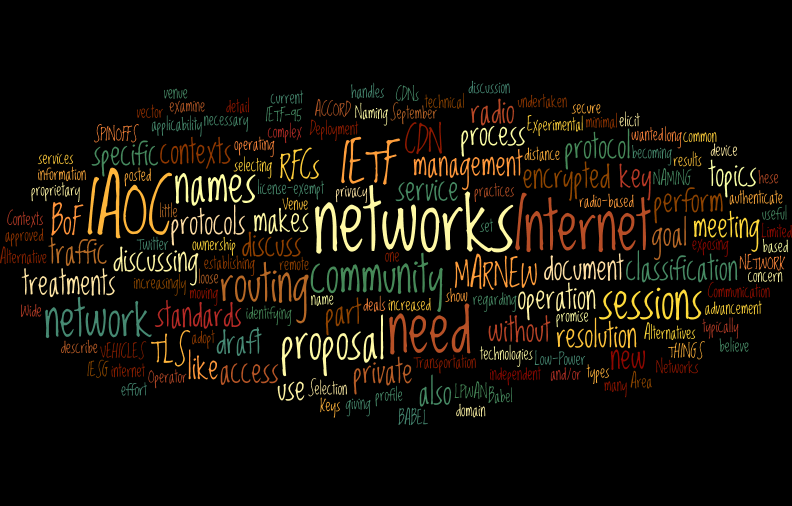 The BoF sessions are one way for IETF to adopt new work, typically discussing a problem or a need for new standards. The IESG has approved these sessions for the meeting.

SPINOFFS FROM THE MARNEW WORKSHOP

These topics are results of the MARNEW workshop held in September 2015 (minutes) to determine what could be done to help operators perform network management, even when the traffic carried in their networks is becoming increasingly encrypted.

Limited Use of Remote Keys (LURK). Communication protocols like IPsec, SSH or TLS provide means to authenticate the remote peer. Authentication is based on the proof of ownership of a private key. Today, the deployment of services on the current Internet largely relies on multiple distributed instances of a service and CDNs. Can a service be offloaded to a CDN without giving the CDN also a complete control of a private key?

Alternatives to Content Classification for Operator Resource Deployment (ACCORD). This proposal focuses on the ability of radio-based mobile access networks to perform some traffic classification for the purposes of managing radio resources efficiently, without exposing any privacy sensitive information. The increased use of TLS and other encrypted transports makes these types of classification attempts more difficult. This proposal suggests that it would be useful to examine both what specific network treatments need to be elicited for the efficient operation of radio access networks, if any, and what the minimal communication to elicit those treatments for encrypted traffic would be.

IAOC Meeting Venue Selection Criteria & Procedures (MTGVENUE) – the community has expressed a concern regarding the process followed when selecting a meeting venue. The IAOC and IAOC Meetings Committee have undertaken to document that process (currently in preparation) in an internet draft for community discussion. The IAOC would like to discuss it with the community. The draft will be posted soon.

Intelligent Transportation Systems (ITS) – the goal is to standardize and/or profile IP protocols for establishing direct and secure connectivity between moving networks. A draft charter for the potential new working group has been suggested here.

Low-Power Wide Area Networks (LPWAN) – this proposal deals with long range low-power and lossy networks, many of which operating in license-exempt bands. Existing pilot deployments show promise, but the loose coupling with the Internet makes the device management and network operation complex and specific. As of today, there is little to no use of IETF technologies in LPWANs at large, and there is a need to evaluate their applicability.

Babel routing protocol (BABEL) – this distance vector routing protocol has been described in detail in RFCs 6126 and 7557, which are both Experimental. The goal of this proposed BoF is to discuss whether it is necessary to create a standards track successor these RFCs, including discussing what technical topics need attention as part of advancement.

Alternative Resolution Contexts for Internet Naming (ARCING). While the most common Internet names by far are those which are part of the domain name system, that set of names is not the whole. There are also independent naming and resolution contexts, such as onion routing or multicast DNS, Handles, and proprietary names such Twitter handles. This creates some ambiguities, and the proponents of this effort believe that the IETF should describe the architectural issue and document best practices for identifying alternative resolution contexts.