The NETmundial meeting was held last week in São Paulo, Brazil. I wanted to provide a brief report of my view of the meeting and its outcome. 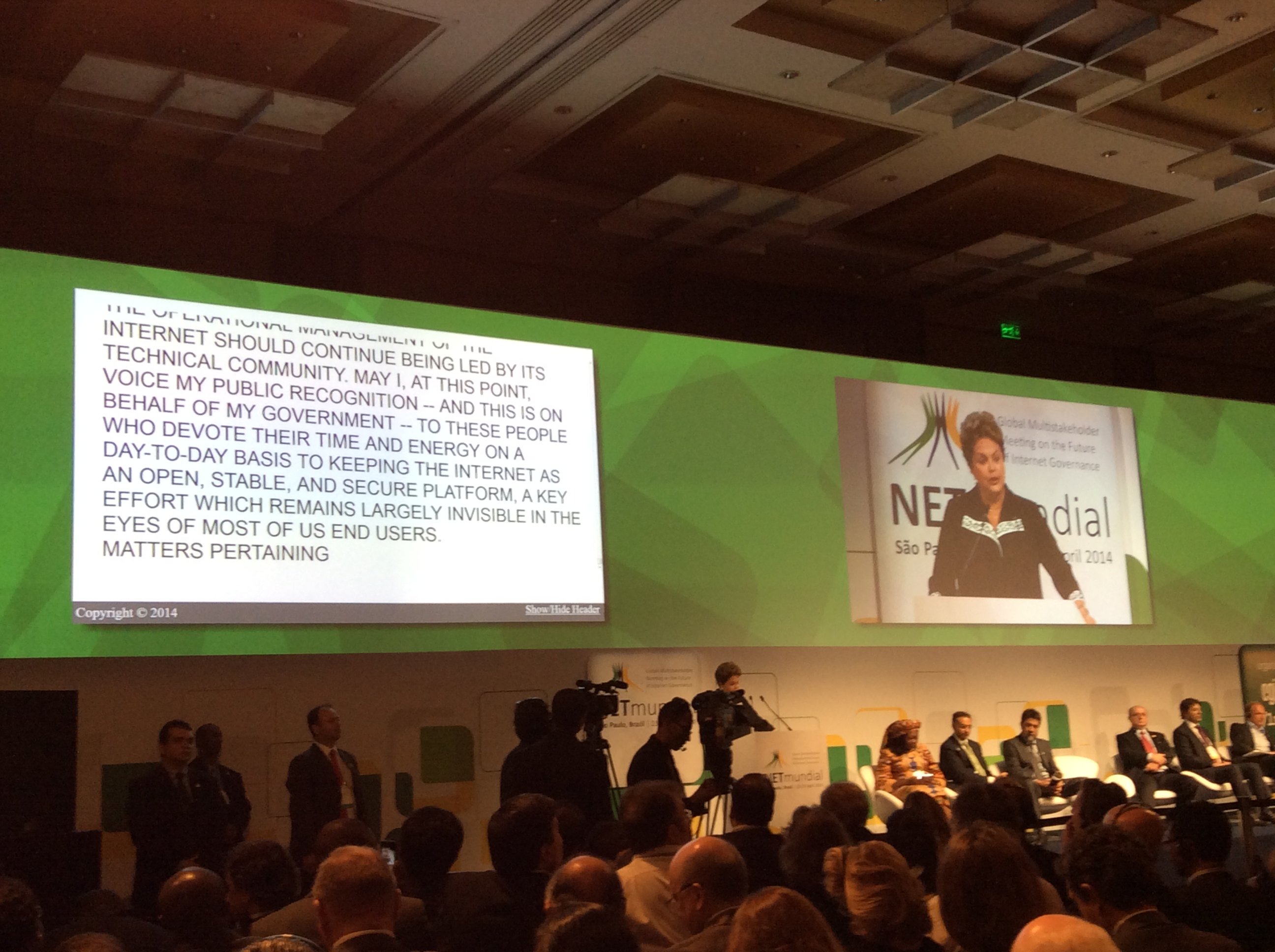 The meeting began with a welcome session, where a large number of key participants made introductory remarks. The most visible participant in this part of the meeting was President Dilma Rousseff, who also signed the Brazilian Internet law “Marco Civil da Internet” into effect during the opening ceremony.

A draft outcome statement was prepared and distributed in the weeks preceding the NETmundial meeting. Many written comments were sent in before the meeting, and the meeting itself consisted mostly of discussing additional comments. The meeting room was organised into four microphone queues, one for civil society, one for governments, one for academia/technical community, and one for private sector. Similarly, all participants had been assigned into these categories, even if some of us could perhaps been classified in several ways.

Open and active discussion followed. All comments were limited to 2 minutes, which forced the comments to be to the point, and a round-robin rotation through the queues and remote participants ensured that different types of participants all got to speak.

The NETmundial meeting produced an outcome document as a part of an editor-panel led effort to find a consensus outcome, or at least to find a statement that would be supported by most of the participants. In the end the panel produced a document that they believe to have a level of consensus from the meeting. Three countries (Russia, Cuba, and India) and a civil society representative made statements about their disagreement with the result in the end. These disagreements had to do with what the outcome was. For instance, some civil society participants were unhappy that network neutrality was left out entirely.

The outcome document seems to me to be on the whole a reasonable one. It includes many good things, starting from the multi-stakeholder model for Internet governance, recognition of the role and rights of end users, open standards, distributed nature of the Internet, and so on. But it also has weak points. For instance, in my opinion the mass surveillance text was rather weak, as noted network neutrality was not included, and the text about protecting intermediaries (such as ISPs) did not make it clear that the intermediaries should not be responsible for the users’ actions.

The IETF leadership team at NETmundial consisted of Russ Housley, Alissa Cooper, Olaf Kolkman and me, but there were many other well-known IETFers at the meeting as well. Our leadership team was mainly observing and discussing with others in the background, although I made a personal comment in support of permissionless innovation, and Russ and I made speeches explaining how the IETF works with protocol parameters in the IANA session.

Overall, a good meeting and a result that indicates very strong support for the multi-stakeholder model from almost everyone, including most countries. Governments participated as stakeholders in the same way as other participants. I am very happy to see that multi-stakeholder, open, consensus processes are at the centre stage in Internet governance discussions – even if plenty of work and debates remain! The meeting has certainly energised these types of discussions in a positive way, and, hopefully, government-only discussions of Internet topics will soon be a thing of the past.

At the IETF, the internetgovtech list run by the IAB is the place to discuss these and other Internet-governance related topics. Please join the discussion!