Periodic posts on the IETF Blog highlight individuals who serve in IETF leadership roles, people who have recently begun working in the IETF, and organizations that make the work of the IETF possible.

Each post aims to describe experiences working within or supporting the IETF. This one is by Mirja Kühlewind, who is an IETF Transport Area Director. You can also see her interview here. 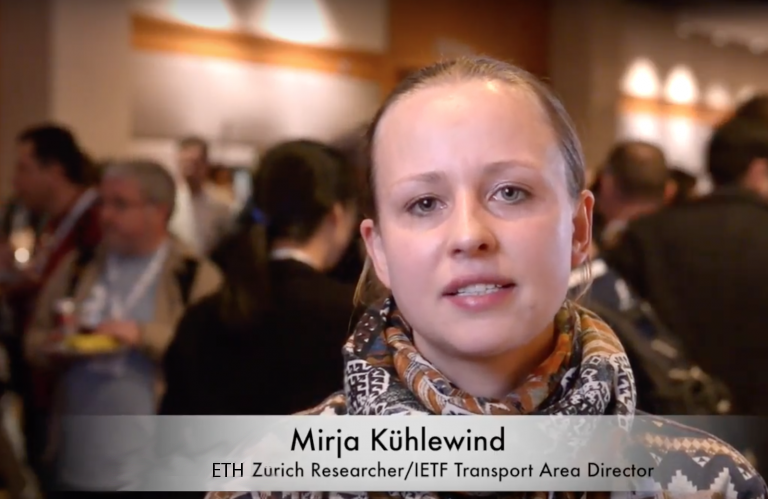 I first got involved with the IETF when I started my PhD. A colleague, who was already involved pointed out that it was starting work closely related to my own interests. I attended my first IETF meeting in 2010, when the CONEX [Congestion Exposure] Working Group (WG) held a Birds-of-a-Feather meeting. From then on, it was my own initiative that kept me working with the IETF—I had support from my group, and they usually had enough travel budget for me to attend the meetings.

Three years ago, I became chair of the RMCAT [RTP Media Congestion Avoidance Techniques] Working Group. I only gave that up when I became Transport Area Director (AD). I also was chair of the TCPINC Working Group for half a year. So I became an AD just six years after starting to participate in the IETF.

There are a limited number of people involved in the Transport Area. As soon as I became more active, I was encouraged to take the role of a Working Group chair. Transport AD wasn’t an option until I finished my PhD. Ultimately, though, it worked out nicely because I got stable funding for a project for a little more than two years, which freed me up to consider the position.

The project is generally funded by the European Union, with additional funding by Switzerland for my part, which includes work we planned to bring into the IETF. This would have allowed me to justify spending so much of my time on IETF work. However, since the project funding is coupled to certain research goals, I additionally contacted some companies and they provide support for some of my time and travel budget.

I hope that my experience as AD can count as management experience and that people value it. It’s a good way to improve your skills because you are in a management position where you don’t have any power, but you need to motivate people. For me, it is about how well I manage Working Groups and how well I manage my time. I spend 40% of my time on my AD work and 60% on my research project. It can be a challenge to balance them.

I don’t think that ETH directly benefits from me being Transport AD. But they did get external funding for our project, and that funding had a strong focus on making an impact on industry. So my standardization work may have helped to get the project funded. I don’t think I needed a leadership role for that. Being a Working Group chair was probably enough to show that I had IETF experience, but my AD role of course also makes a good impression.

Everybody’s biggest concern about taking on an IETF leadership role is time management. I do it on a 40% basis. It’s a little stressful, yes, but it is possible. The other reason it’s hard to find people for the Transport AD role is that the right person not only needs support, money, and time for the IETF, but also must have an overview about what’s going on in Transport. I was in the unique position that I was following the same Working Groups that I now carry as AD—it’s no extra effort.

I don’t have a plan yet for when my term is over, but I know I’d like to stay involved in the IETF. When my ETH project is finished, I’ll be a four-year post doc. I’ll need to make a decision about whether to stay in academics or go into industry. If I apply for a job next year, I won’t stand as Transport AD—I can’t ask a new employer to let me spend 40% of my time on the IETF. Even as a professor, it would be hard for me to get 40% of my time off for the IETF.

It’s been an interesting experience, particularly because I’m just starting my career. I’ve learned a lot, and I’ve made a lot of industry contacts that I’ve gotten to know well. I’m grateful—the IETF as a community has provided me with networking opportunities and a source of ideas for research.